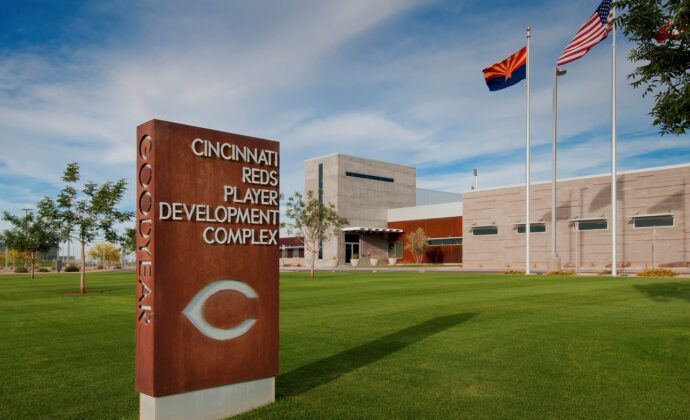 The Goodyear Ballpark and Recreational Complex is a Major League Baseball spring training facility that opened for the 2009 season. The facility originally consisted of a 10,000 seat ballpark and separate player development complex for the Cleveland Indians. In late 2008, the Cincinnati Reds were brought on board and a player development complex was completed for them by fall, 2009. Boasting stunning architecture and first class amenities, Goodyear Ballpark can host 10,000 fans within its 8,000 fixed seats, six private suites, two party decks and outfield seating berm. Proximate to the ballpark are the two 50-acre player development complexes where the teams train year-round. Each complex includes a 42,750-square-foot clubhouse featuring major and minor league locker rooms, training and hydrotherapy areas, a weight room, video coaching, classroom and dining areas, as well as administration offices overlooking the practice fields. Outdoors, each complex has six full-sized fields with an observation tower, two half fields, one agility field, six indoor batting tunnels, six open-air batting tunnels and eighteen pitching mounds.

In partnership with a local Arizona developer, JMI Sports created an innovative concept to integrate a publicly owned ballpark with a private mixed-use development. The City of Goodyear embraced this plan and engaged our firm to secure interest from a Major League Baseball team. After playing an instrumental role in the negotiations with the Cleveland Indians and providing critical support during the public approval process, JMI Sports was named Development Manager for the new spring training facility. Prior to breaking ground, our team carefully managed the evolution of the project’s budget and schedule and diligently led the design effort to ensure that both the Indians and the City would have a beautiful asset to serve their needs for many years. Subsequently, our firm assisted the City in securing the Cincinnati Reds as the second tenant of the facility and similarly managed their design process. In addition, JMI Sports diligently oversaw the construction of the ballpark and both player development complexes, working closely with the City of Goodyear and both teams to ensure that their expectations were met and goals were achieved – delivering the entire $150 million project on-time and on-budget.

“JMI Sports was a fantastic partner to have throughout the design and development process. Their leadership helped us develop a complex that achieved all of our different agendas. If you are looking for a partner to build a project like this, JMI Sports is your team.”