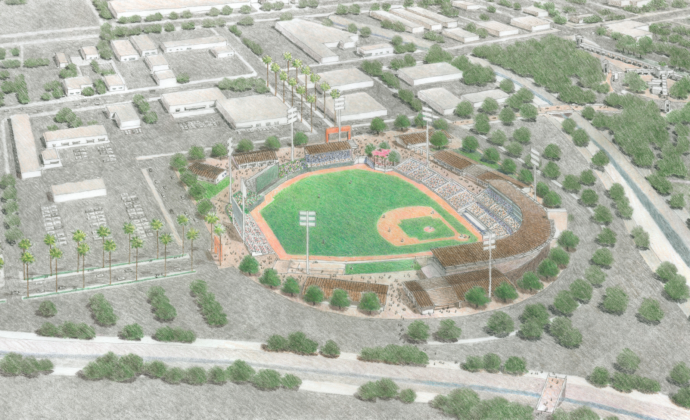 In late 2010, the Moorad Group, led by former San Diego Padres CEO Jeff Moorad, purchased the Padres’ Portland-based AAA Minor League affiliate and sought to move the team to the San Diego region. After an exhaustive analysis of potential sites and public partners, the City of Escondido was selected due to the unique development opportunity it presented. The proposed ballpark site was located in an underutilized industrial area close to downtown Escondido that offered terrific access to highways and public transit, with numerous development parcels that would have allowed the ballpark to act as the anchor for an envisioned mixed-use development that was to include office, retail, residential and hotel properties. As a catalyst for public and private development, the ballpark had the potential to transform the economic viability of an underutilized area of Escondido, while creating a state-of-the-art ballpark that would also serve as a venue for public gatherings and entertainment. As a result of California’s disbanding of all redevelopment agencies and their associated financing, the project was canceled due to lack of available public funding.

JMI Sports worked with the Moorad Group to convince the Pacific Coast League that locating the ballpark in San Diego County and in close proximity to the team’s Major League market was both viable and a sound business strategy. Subsequently, JMI Sports led the due diligence and conceptual planning effort to evaluate site alternatives, ultimately making the recommendation that Escondido was the best location for the franchise due to the political and public support, existing infrastructure, central location, proximity to public transportation and quality of developable parcels surrounding the ballpark footprint. After helping facilitate the negotiations between the City of Escondido and the Moorad Group, JMI Sports initiated the selection of the project architect and design team consultants with whom they worked to develop the conceptual design and programming for the ballpark. JMI Sports also spearheaded the initial effort to perform the land use environmental studies on the site prior to the project being canceled.

JMI Sports created a development plan for our prospective new AAA ballpark in Escondido that will work exceptionally well for baseball and also provide significant opportunities for ancillary development. This ballpark will surely be a terrific asset to the community and a catalyst for economic growth if Escondido chooses to go forward in these challenging times. JMI Sports has earned my utmost respect for their substantive work and professionalism regardless of the project’s ultimate outcome.